For the penultimate part of this series, I’m going to look at something a bit more complex, reposing limbs. It’s something that I’ve done a few times and it can be very, very frustrating. On the other hand, it gives a unique pose. I have to admit that the example shown here was not my most successful attempt, I used Tactical Marine legs (as that’s what I’ve got at the moment) rather than the running legs available in the Space Wolves Pack kit, and not only is the Tac Marine pose a bit weird it’s a bit of a nightmare to repose as I had to adjust the ankle as well as the knee and hip joints. I suppose that my first bit of advice then is to try to pick a limb (or set of limbs) that is as close in shape to the final pose as possible.

The second thing to look at is the material from which the limb is made. Oddly enough, given its reputation, Finecast is easier to work with than plastic in this case as limited reposing can be done using a hairdryer. All you need to do is heat the limb for about thirty seconds (hairdryers vary so I’d recommend heating then testing every few seconds) before gently bending them to the right shape. I had to repose a set of Shining Spear legs this weekend and it took seconds in order to pose them. If they had been plastic it would either have relied on judicious shaving of limbs and mount or several hours with wire and scalpel and if they had been metal, well, I’d probably have ended up sitting on the floor rocking back and fore trying to figure out how to jam them together.

For this article I’m going to start with reposing legs. I’ve done this a few times now (well, at least four) and it’s fairly straightforward, it just requires a bit of work, some planning and a lot of patience. As I play a Space Marine variant army I’m going to use Marine legs to do this. It should also be possible to do something similar with other races but you’ll need to think about how you’ll model the joints as power armour has convenient corrugated bits at the joints (can’t think of the proper name for them right now). You will need: 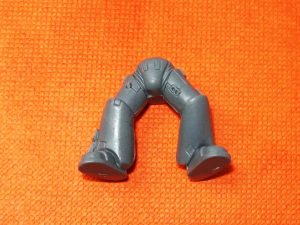 The first job is to stop and think. I’m serious, honest! Before you cut anything you need to consider what pose you’re planning and how you’re going to do it. Are you just shifting one knee so that the guy is striking a heroic pose or are you going to have to move every joint? Is the pose anatomically possible? I have been known to try and pose heroically on a chair to try and figure out what I’m about to do. Fortunately my boyfriend hasn’t taken any photos as I don’t do heroic particularly well!

The next job is to cut up the set of legs. I use a scalpel rather than a razor saw as it removes less material (if somewhat more finger). If you’re going to be doing a lot of joints, you may want to label them. 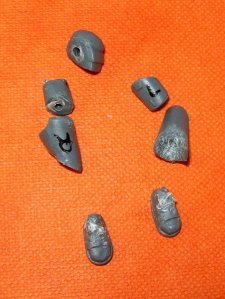 Then you need to drill through the cut up pieces. If a piece needs connecting at both ends (such as the thighs of the example), drill all the way through, otherwise drill deep enough into the plastic to hold the wire securely just as you would when pinning.

Then thread the wire through, gluing it in place. Leave enough space at the joints so that you keep the model’s proportions once it is posed. Using wire lets you repose the model a bit, so that you can get it just right.

Next up, you need to use green stuff to fill in the joints and tidy up any mess you made when cutting up the model, such as with the ankles on the example legs, which had to be dug out rather than cut cleanly. Please take your time when doing this. Do one joint at a time and wait for it to be set before starting the next one. I’m serious. If you store mixed together green stuff in the freezer it will stay soft for about a day and a half. Simply warm it in your hands for a minute or so before using.

File or sand any rough edges and your reposed legs should be ready to use. I’ve used the same technique to repose arms too. 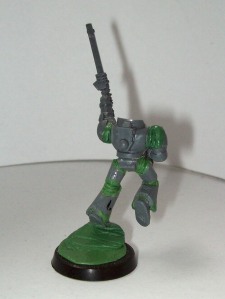 A simpler way to repose arms is to play with how the limb connects to the body. You can trim and file the joint before filling in any gaps with green stuff. It’s much simpler than making a new joint but is only really suitable if you just want to tweak a pose slightly.

There’ll be one last post in this series but I need to find the bits, something which is turning out to be harder than I thought.

This is the test model for a New Project. I picked up the Eldar codex when it came out and I thought that I might like to build a force as a side project. Of course, being me, I didn’t just go for a nice safe Craftworld army, I decided that I’d like to build Exodites… on dinosaurs!

No dinosaurs in this post, I only picked up the relevant kits on the weekend, but I decided that, as I’m building an Exodite force, that Rangers would probably be the best troops unit to start with and the best models for testing out my colour scheme. I’m using an autumnal theme based round reds and greens and browns. For the green on the coat I started with Caliban Green, before washing it with a blend of Biel-tan Green and Nuln Oil. I then highlighted it with a 50:50 blend of Caliban Green and Warpstone Glow, Warpstone Glow, and finally Scorpion Green (Moot Green). For the red areas I started with Wazdakka Red, washed it with Baal Red (Carroburg Crimson) before highlighting with a 50:50 blend of Wazdakka Red and Blood Red (Evil Sunz Scarlet), Blood Red, a 50:50 Blend of Blood Red and Trollslayer Orange and then Trollslayer Orange. For the cloth areas and the gems I used two further highlights: 50:50 Trollslayer Orange and Yriel Yellow and finally Yriel Yellow.

For the wraithbone I used Bleached Bone (Ushbati Bone), washed it with Gryphonne Sepia (Seraphim Sepia), then highlighted it with Bleached Bone and a spot of Skull White (White Scar). The wood effect on the rifle was created by starting with a layer of Scorched Brown (Rinox Hide), washing the area with Nuln oil then highlighting it with a 50:50 blend of Scorched Brown and Snakebite Leather (Balor Brown) followed by Snakebite Leather and a touch of Tausept Ochre (GW says Balor Brown is its replacement but I think it’s more likely to be something like XV-88 or Tau Light Ochre but I’m not sure). I used a similar method for the backpack.

I need to paint the other four of these, but I think that I am pretty happy with the results and I want to go with this colour scheme.

My next job is to finish painting Captain Tycho for my boyfriend and a few Space Wolves for myself. Then I can get back to painting and modelling Eldar. I’m not building Eldar as an army to play, at least not initially, that’s what my Space Wolves are for, but I want another painting challenge and I think that the Exodites will fulfil this.

On a related note, I’ve just finished Promethean Sun, which I bought partly for the very relevant cover! I really enjoyed it. Nick Kyme is very good at writing Salamanders and he’s even better at writing about Vulkan himself. The story belongs with Feat of Iron which was published in The Primarchs anthology. It’s very short but it’s crammed full of information about Vulkan and Exodite Eldar (much more than the Eldar codex in the last case). It’s nice to see the limited edition books starting to be released at last and it looks like Promethean Sun has been released just in time for Vulkan to get his own book in the Horus Heresy series. I’m really looking forward to the release of Vulkan Lives, whenever that will be. If it’s at all like Promethean Sun, it will be very, very good.