In a fit of drunken grumbling three weeks back, I found myself bemoaning the loss of the female Inquisitor model by Games Workshop. At some point I realised that I had some female Dark Eldar bits kicking around and decided there and then to kitbash my own.

Next I sculpted the coat, sword hilt and hair from green stuff. I did this in several stages so as not to damage any of it. I started with the skirts of the coat, which I built by cutting panels out of soft green stuff and fixing them together on the model. When they were almost set I built sleeves round the arms. Only when these were set did I add the cuffs and lapels. The hair I added in several layers in order to get enough fullness. One great thing about green stuff is that it freezes, so that you can happily pause between layers, stick the leftover green stuff in the freezer for anything up to two days, then, when you’re ready for the next layer, warm the frozen green stuff in the palm of your hand and you’re ready to go again! 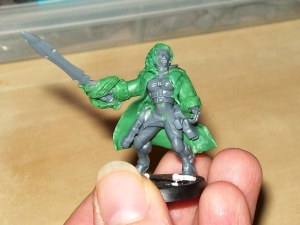 Most of the purity seals came from the Tac Marine box, although the big one came from the Ravenwing box (as did the book on the base). 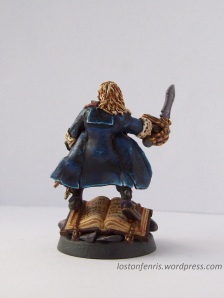 I posed her standing on a heretic tome as she will probably be played as an Ordo Hereticus Inquisitor eventually. Hopefully I will build a retinue to go with her when I have the bits and the inspiration to go with them!