I took a decisive step forward with my Eldar Exodites and built and painted my first Shining Spear. I love the cover of Promethean Sun and the dinosaur riding Eldar on the front and so I’ve used that idea for my Shining Spears. 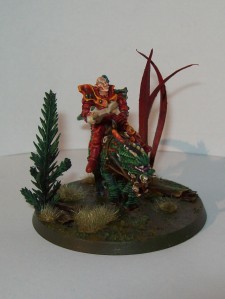 I used the Dark Elf Cold Ones Knights kit for the mount and the head. The rest of the model was from the Shining Spear upgrade kit.

I removed the head from the Shining Spear model and the controls from the left hand. I have to admit that I was glad that the model was Finecast (shocking I know!). The soft resin is much easier to cut than plastic or metal and I could adjust how the rider sat on the dinosaur with judicious blasts of the hairdryer! I can cope with bubbles and flash if I can save several days of work elsewhere! 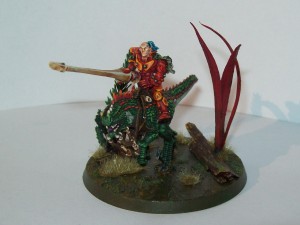 I used green stuff to bring the neck and torso together and for the scrap of hide on the left shoulder.

For the base I used some scraps of cinnamon sticks from and old packet in my kitchen for the logs and some bits of a fake plant for the leaves. Once I had painted the model I used Water Effects mixed with either Devlan Mud, Guilliman Blue + Waywatcher Green or Waywatcher Green for the more liquid parts of the base and some Middenland Tufts for the clumps of grass. 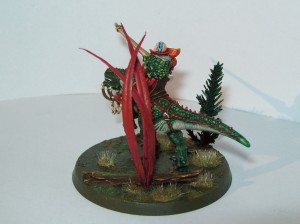 I’m using autumn colours on this army so, having painted the dinosaur green, I used reds and oranges on the model. I wanted to make the Shining Spears a bit different from the Rangers, so I used the orange to break up the red. 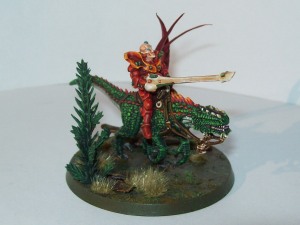 I need to build the rest of these guys now and finish the Rangers. While the Shining Spear was great fun to paint (even if the scales were a bit wearing after a while) he took more than a day to build so I guess that it will take me some time to do the other three. Still, this project isn’t so much about speed but about building and converting an army that is a bit different and which allows me to be a little bit creative.

One response to “Exodite Shining Spear”