Now, I’m a keen baker. I enjoy making cakes and I have a lot of fun thinking up new ideas. Exhibits 1 and 2 are a couple of cakes that I made to give to The Overlords at Salute in April. So, when they announced a quick “what cake would be good for the Overlords” competition at the end of their 100th episode, I quickly thought up the following idea, just for fun. 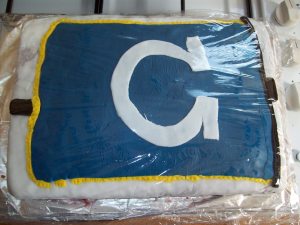 “Well, I was thinking a fruitcake, with the fruit marinaded with a mixture of beer and caffeinated beverages. There should be a good sprinkling of mixed nuts. There should be the salt of Ciaran’s tears after a hundred repetitions of his jingle, a Random teaspoon of something from the spice jar, mixed like one of Steve’s jingles and topped with one of Dagmire’s innuendos” 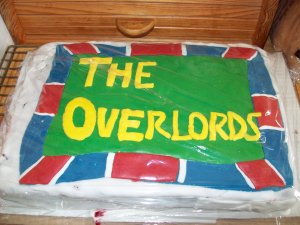 What happened though is that I ended up winning a £100 KR Multicase voucher.

Now, if you don’t know what KR Multicase is, they’re a company that makes carrying cases for gaming, including 40K. What’s nice is that the cases are modular. You pick the outer case that you want, and unless you pick an aluminium case, you pick a card case or two or three or even four to go in it. Then you need to pick, or ask the guys at KR to pick what foam you need.

The foam they use is blue and well, squishy. It’s got a firmish texture- it’s more like a bath sponge than a pillow, so it holds its shape, yet is soft enough to deform to fit and hold a model and protect it. It’s about a gazillion times better than cotton wool, which was what I was using before.

I picked a KR backpack 2 with one case and it turned up last week. Along with the case I also received a surprise KR accessory case (which I’ll briefly describe at the end).

The reason I picked a Backpack 2 is because I travel quite a bit. The closest place where I can game is about 9km away, which usually means hopping on the train or a tram as there is no way that I’m cycling with my models. I’m British although I’m based in The Netherlands so I also want to be able to carry my models and my stuff with me to the UK, so I went with the backpack because it’s convenient to carry and I picked the Backpack 2 because of the space!

So, to describe the Backpack 2… Exhibit three shows my new backpack. It’s a nice size and not too big for me. I’m quite small, so there is a risk with rucksacks that they are too long for me. This one is comfy and I can even sit down wearing it. The straps are padded and webbing lined, so that they’re comfortable and I imagine that the webbing would be nice in hot weather (unlike the storm that’s currently raging outside- it’s June I tell you, June!). 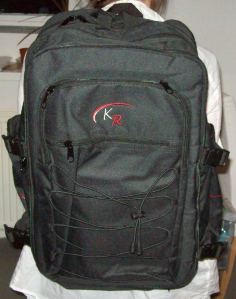 There are also two sets of horizontal straps to hold the bag in place while you are walking. I’ve not tried this bag outside the house yet, but I know from past experience that it makes a big difference, particularly if you have a heavy load and/or are very tired. All of the straps are nicely adjustable and the chest strap can be slid vertically too so that it can be made more comfortable and avoids the embarrassing squished or double boob effects. There are also a couple of smaller carrying straps for when you store it for travelling or want to haul it about the house.

The bag itself has six pockets. The two largest are designed to hold a KR card case each. The next biggest pocket can easily hold a rulebook, codex and the KR Accessory case and there’s even space for a novel at the top. There’s a smaller flat pocket in front of that and there are also two sizable side pockets for snacks or other random bits. There’s even an elastic string thing on the front where you can shove a sweater or a waterproof.

My card case goes into the back pocket and I currently have the front pocket free, either for a future full sized case or even a half case (which is one of KR’s latest innovations). It could also be used for other things. If you pack lightly (and no, refreshing boxers by wearing them inside out is not packing lightly, it’s gross!) you could probably fit a week’s kit in there, so it’d be perfect for a short trip home or for a gaming weekend, such as a tournament, if you’re into that sort of thing.

The backpack itself is black with discreet red and grey KR markings, so if you’re embarrassed about being caught in the city with something that marks you out as a gamer, you don’t need to worry. The second case holding section also folds away neatly, so if all you need is one card case, then you don’t have an empty section flapping around.

I suppose that I should get onto the card case and its contents now. The card case, is, as you might have guessed, made of cardboard. This means that it’s not waterproof, but it is light and the card is rigid enough that it should be fine unless you jump on it or something incredibly stupid like that. If I want to take my backpack out in really wet weather, I might just wrap the card case in a plastic bag just to make certain though.

The case has a plastic handle that acts as a catch to stop the case accidentally opening. Because the case is packed pretty solidly with foam it can be stored on its edge or even upside down without the models being shaken about.

Inside the case is the foam. The beauty about this case is its simplicity. One card case can store several layers of foam which are either “custom”, that is the foam is cut to fit a particular model, or “core”, that is the foam fits a variety of models. So far I’m pretty happy with it. There has been one casualty, one of my Fenrisian Wolves came off his base, but that was my fault for forcing the model a little too much. The Fenrisian Wolves are awkward, because they are rather an odd shape. I managed to fit the rest in without difficulty, so I can’t complain at all.

The last part of this post is about the accessory case, which is a clever little innovation. It consists of a small aluminium case which can be separated into two halves, one for each player. The case itself can be used to store dice and tape measures (both of which are supplied), but it’s beauty lies in the fact that, split in two, it can be used for rolling dice. It’s velvet lined, which looks nice, deadens rattling a bit and, if you do store anything at all fragile in there, it is less likely to get damaged. 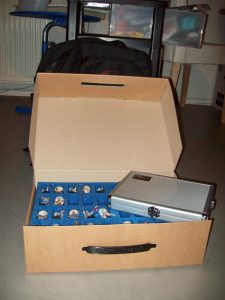 I guess that that is about it. I have to say that I am very impressed by the case and the wonderful customer service at KR. Daryl was incredibly helpful and once everything was finalised, it arrived here very quickly. Now all I need to do with my case is fill it!

I should say an enormous thanks both to Daryl from KR and to Inquisitor Steve and The Overlords for such an amazing prize. Check out both websites!

Edit: I’ve been told that the backpack is actually waterproof! Thanks and sorry!